Shadows Jesting (in memory of our master, W.S.)


As we were walking one behind the other,
once upon a late night in April,
I fancied that your shadow, side-swerving,
had sought the solace of my shoulder.
So I turned my head and extended an arm,
that you rejected dignified…
Yet onward we journeyed, a trifle
sadder though, our shadows entwined.
It was late upon an April night
and still we hoped to reach out far. 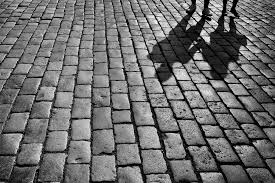